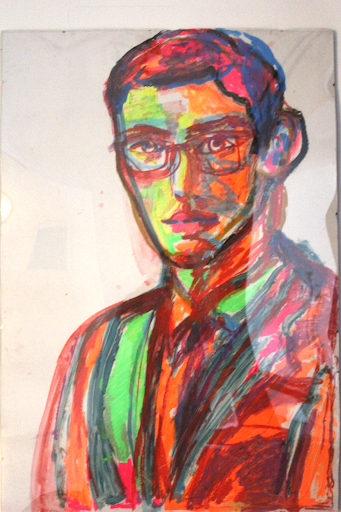 Earlier this month, June 2019,  we were delighted to showcase a solo exhibition by Sophie Venturini from Thames Side Studios.

The exhibition focuses on a collection of her works including paintings, drawings and ceramics. As an independent artist Sophie has brought to life a range of her own original content. Sophie enjoys working with bright colours and has a keen interest in expressing herself through bold colours and striking mark making. This is evident in her abstract and figurative works, often articulating emotional and imaginative content. 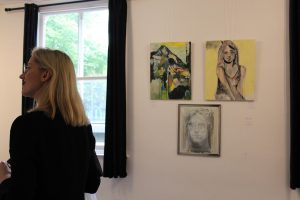 The launch was stimulating and the evening was spent with Sophie wandering amongst the guests, conversing and exploring each piece. The street lights had ignited, the gallery spotlights were sparked onto the pieces and the guests peered inquisitively into each and every piece. Sophie is keen on the dialogue and interactions made between the art and the audience. She spent the evening, wine glass in hand, connecting and communicating with everyone – considering their own interpretations and inferences.

The Entrepreneur catches the eye as soon as you walk in the gallery. The portrait embodies a young sophisticated man dressed in a suit and tie. The piece has a sketch like quality with lines and colours layered on top of one another, making impressions and contours. Most of her strokes and shading have been made in red, a bold and compelling colour to use. The piece is also heavily highlighted with neon. Sophie explains that the neon is expressive of the modern era, symbolising a protest against the traditional red. This new generation of modernity is vibrant and assertive, it is sophisticated and exudes confidence. The man’s countenance is bold and dominates the empty space. The multi-coloured quality of this piece further suggests the multi-faceted and different characteristics we inhabit that complicate former definitions of identity. The colours struggle to keep in their lines in the same way we resist from definitions and restrictions outlining and labelling us constantly in society. 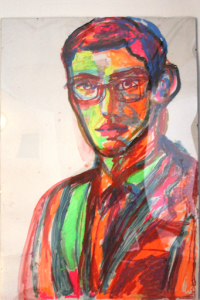 Another captivating piece is Mother of the Birds which explores motherhood and the maternal. Sophie Venturini explores her own experiences of maternity and motherhood in this painting. The painting features a woman in the foreground surrounded by birds that seem to be caressing her as she holds them in her arms. This piece considers the two-way relationship of motherhood; not only is the mother holding and supporting the birds but the birds are also caring and loving – almost nuzzling the mother. The page is subtly vibrant and colourful, in a way that almost suggests the colour is slowly developing on the canvas. The hues of blue and pink, as well as the smears of green and yellow, add pigment and life to the grey background – almost in the same way that mothers often feel as if their children have  added a sudden rush of colour and depth to their lives. The piece also considers texture closely, it is almost three dimensional. The strokes and layering form a rough and raw finish to the painting.

Gabriel has been recognised as an all-round favourite from this collection. The portrait painting is captivating. Inspired by the biblical figure Gabriel, the painting portrays the being in an almost saint like manner, with its angel wings extended behind like a headpiece. The hair is straight and almost modern, like a new age Gabriel transcending into the 21st century. The painting is dominated by hues of blue – with strokes of bright pale blue striking the figures cheekbones and chin. Sophies use of pigment when shading is inspired. The colours both complement and contrast one another on the canvas. The eyes are dark and piercing, sustaining the focus, drawing the reader further into the piece. 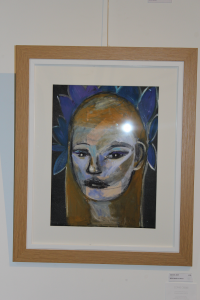 Another interesting piece is The Shaman, an explosive mixed media painting. The piece is vibrant and colourful, bursting with shades of blue, pink and purple against its black outlines. The bright pigments used to illustrate the face feel somewhat foreign and familiar at the same time. The Shaman represents outdated and alternative spiritual modes of knowledge. Here Venturini has developed a modern take on ancestral figures. The glitter and dripping effect used contrast the ancient ideals of the Shaman himself but also suggest that these notions of tradition and culture can in fact go beyond their ‘designated’ time and exist in the modern world. The headpiece, recreated in glitter, almost imitates a radiating and iridescent halo. The colours of the face in the foreground extend to the background of the piece as if the Shaman himself exudes its energy, overwhelming the canvas. 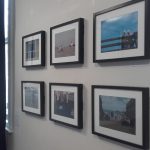 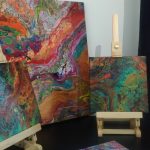 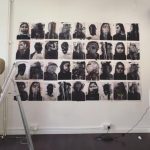 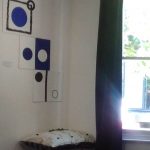 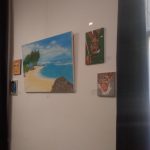 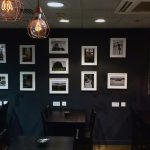